Health and Safety and Covid Updates 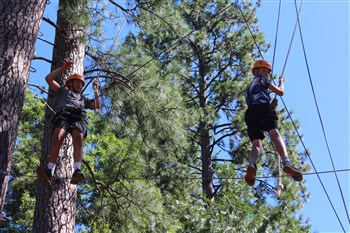 Vertical Play Pen, Leap-of-Faith, and Double-Trouble – all part of the high rope course at Camp Lodestar – were the most popular and challenging activities of the summer for campers. This year 40 campers, grades three through nine, attended the July 14-20 camp. There were also 10 campers in 10th and 11th grades who were Leaders in Training (LIT) and were paired with a counselor to act as a leader and mini counselor for their assigned cabins. (Last year there were 14 more campers but three fewer LIT.) 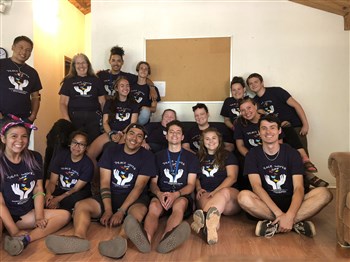 With a staff of 16, camp director Alexandra Castile focused daily activities around the theme of “Peace Works: Empowering the Next Generation of Peacemakers!”
“Each day at camp represented a different understanding of peace: We learned about the hospitality of Aloha, connectivity of Ubuntu, the response of Shalom, the reconciliation of Agape, and the self-awareness of Heiwa,” Castile explains.
“We engaged our campers and allowed them to express their interpretations of the day’s Scripture by having them help lead morning worships. Each cabin was given the opportunity to present their interpretation of Scriptures through skit, poster, prayer, and song. Devotions continued in small groups, paired with an arts and crafts activity as well as a team-building game that was age appropriate for those campers.”
Classic camp activities included campfires with S’mores, twilight games out in the meadow, skit night, prayer stations, archery, leather work, and “all the other arts and crafts that you can think of!” adds Castile, as well as “stargazing, 3,000-foot elevation: The stars don’t get any clearer than that!” 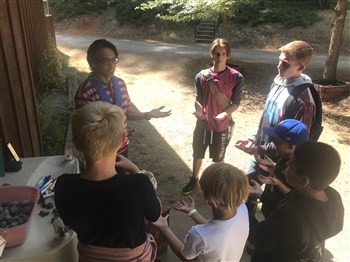 After the ropes course, the second most popular place at Camp Lodestar was the pool. Campers got daily pool time and a special night swim after the annual water games – “the 2019 Camp Olympics!” – that was planned and produced by the camp’s LITs.
“Our campers pushed their coordination and problem-solving skills to the limits, but everyone has a fair chance of winning. You not only earn points for your abilities, but also for your sportsmanship. Shout out to Sepa and Tristan’s cabin!” Castile says.
“Camp has always been a safe, healing and growing space,” Castile adds, summing up the experience. “Give a listen to Beyoncé’s “Spirit,” from Disney’s The Lion King. That energy – the rush of faith, peace, and beauty – that’s what camp was like.”
News